One of the greatest challenges throughout my years engaged in graduate study has been the struggle to validate my field. Validation certainly is a problem in the humanities, especially with the advent and reign of STEM fields and areas. However, even within the field of English, I am constantly met with ridicule, or sometimes scorn, when I tell some of my colleagues that I  primarily work with teen and young adult literature. This has to do with the fact that there are some who consider the study of YA literature to lack the challenge and the intellectual rigor that “authentic” forms of literature fully embody. I find it very curious, however, that some literary scholars dismiss these forms of literature, when most of the time, it is the YA genre that sparked our love for literature in the first place. 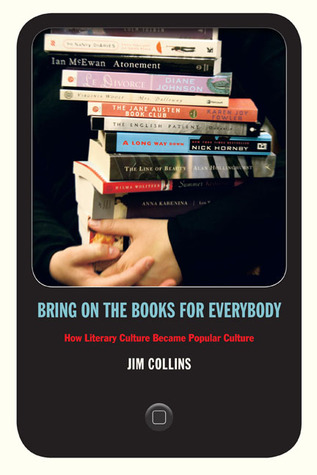 Trying to argue for the usefulness of inclusion of certain genres within the literary field is indeed challenging. However, the primary reason that this challenge is seemingly insurmountable can be attributed to people who think that the label of the “literary” is static and impervious to change. I recently read Jim Collin’s wonderful book titled Bring on the Books for Everybody: How Literary Culture Became Popular Culture, and in due course, this text was a delightful and in-depth exploration of how notions of the literary have rapidly transformed over the past few decades due to developments in multimedia, social networking, and book marketing. Furthermore, the book insightfully illustrates how the literary has melded into the realm of the popular despite the futile attempts to keep these two domains apart.

Part of what I found so convincing about Collins’ book was his reconfiguration of the notions of literary taste and literary communities. Traditionally, when speaking of literature, we tend to resort to the use of hierarchies in order to establish what texts deserve the literary crown, and which texts should remain within the lowest ranks of this pecking order. This notion was made very clear to me when I was once having a discussion with one of my colleagues, in which I was trying to defend Susanne Collins’ Hunger Games series as literary. I thought the series was noteworthy not only because it is an entertaining read, but also because it thoroughly explores issues that some readers otherwise would be oblivious to (i.e. capitalism, social injustice, etc.). My colleague, on the other hand, thought that the series was “poorly written” and that it was too focused on the ventures of a “whiny protagonist.” What we had here was a clash not only of taste, but also in terms of our identifications with particular reading communities. But were any of us wrong? According to Jim Collins, not necessarily so.

Collins focuses on how emerging literary markets, especially those found online in sites such as Amazon.com and large book chains such as Barnes & Noble, are based not on hierarchical tastes, but rather, on the acknowledgment of “different reading communities as coequal options” (78-9). This can especially be seen by the Listmania lists that certain readers develop in Amazon, in which people resort to book recommendations not based on a hierarchy of what is good or bad, but rather, on how well a reader’s own literary taste matches with that of the list creator (thus converting the list creator into someone whose literary judgment can be trusted). The Web has enhanced the existence and prominence of particular reading groups and communities, especially with the advent of websites such as Goodreads, which allows users to generate lists based on the votes and opinions of thousands of readers. My discussion with my colleague in terms of the Hunger Games series not only exemplifies our belonging to different reading communities, but it also represents a clash between traditional and current understandings of literary culture.

Collins further explores this tension by focusing on how forms of popular culture have not only become more “literary” as time has progressed, but also how these forms further fuel the perpetuation of a literary culture that is wrongfully deemed lost. Whether it be through film adaptations, through television shows, through social powerhouses such as Oprah’s Book Club, or even through other forms unexplored by Collins, such as video games and internet blogs—the way we experience the literary is no longer bound to text. Did you delve into Fitzgerald’s The Great Gatsby though writing, or did you recently watch the 2013 adaptation? Are you familiar with the life of Leonardo Da Vinci through encyclopedias and history books, or do you watch the 2013 television series Da Vinci’s Demons? Have you experienced Shakespeare’s Hamlet through the playtext, through a performance, through the Sparknotes available online, through a comic book, or through one of the many movie adaptations (such as the 1996 version by Kenneth Branagh)? Perhaps the divide between literary and popular culture is not as engulfing as many assume it to be. As brilliantly put by Collins:

Popular literary culture represents a powerful counterargument to the Fahrenheit 451 scenario, since it is built, from the ground up, on the interdependency of the print and visual culture, not a world of books versus wall screens, which persists only within an ideology of reading that can accept just one form of literacy and, therefore, must demonize all electronic culture. (265)

I think that an awareness of how literary culture has changed will be extremely usefully, especially for those who explore non-canonical or non-traditional literary forms. At least within my own studies, I am sure that Collins’ discussion will serve as a sturdy platform for my explorations within the young adult genre, a genre that in due course thrived with the advent of today’s popular literary culture. If you’re seeking a way to situate your understanding of literature within the landscape of popular culture, or if you simply need to encounter an optimistic spin on the literary future of contemporary society, then I definitely suggest that you give this book a look.

“On the Evolution of Literary Culture – Jim Collins’ Bring on the Books for Everybody” was first published at http://angelmatos.net on June 11th, 2013.

Angel Daniel Matos is an Assistant Professor of English and Comparative Literature at San Diego State University (SDSU) who specializes in children’s and young adult literature. Prior to his position at SDSU, he was a Consortium for Faculty Diversity Postdoctoral Fellow at Bowdoin College. He received his Ph.D. in English and a graduate minor in Gender Studies at the University of Notre Dame in May 2016, and was a Kinesis-Fernandez fellow at that institution from 2011-16. His scholarship explores how queer experiences, histories, and emotions are shaped and narrativized in LGBTQ+ youth fiction. More specifically, he examines how queer narrative and aesthetic practices foster political and affective frameworks that complicate current understandings of young adult literature, media, and culture. View more posts